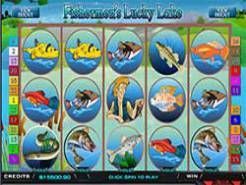 Play Now
What can you reel in playing Fisherman’s Lucky Lake slots? Start with the 5,000 payout for landing five wild eels. There’s the Golden Fish bonus awarded when you get at least three fisherman. You can also win free spins when you get at least three scatters. Fishermen’s Lucky Lake slots has 25 paylines and bets ranging from a penny to $10 per line. Winnings do tend to come quickly, especially with so many fish waiting to bite. When you do have a win, you can gamble to double or quadruple the prize. You can also hold one reel, so if you have a symbol you think could win you a bundle on the next screen, be sure to put it to good use.

The eel may be worth the most at 20 to 5,000 coins, but other fish in the lakes are pretty substantial too. At the bottom end of the paytable are smaller fish that range in value from 2 to 150 coins. The next tier include fish worth 8 to 300 coins. As you get to the top tier, fish dramatically increase in value from the orange fish worth 15 to 350 coins to the yellow fish that’s worth as much as 600.

The trout scatter is worth as much as 100 coins, but its value as a scatter is more important. Three or more trigger the free spins bonus.

Three fishermen triggers a bonus where you choose fish and gain cash prizes. It’s a quick and easy way to win a bundle in a matter of seconds. It’s not like you need more reasons to play Fishermen’s Lucky Lake slots , but there is one more reason this game is so appealing. The sound effects seem pretty realistic. Listen to the fishing reel as it winds and brings in your catch of the day. Hear the fish slap against the water as they fight being caught. It’s really a fun game with sounds that make it feel like you could be at the lake waiting for the fish to take the bait.
Play Now