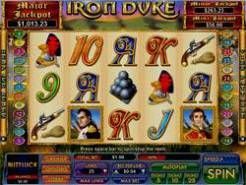 Play Now
Iron Duke Slots is a 5 reel 25 payline progressive video slot game. This slot machine game includes fabulous graphics with substantial rewards. The wagers in the game begin at a penny and a maximum of a dollar. The maximum bet per spin is $25 which means it is a game designed for both small time gamblers as well as high stakes rollers. With the variation of possible wagers, the game fits in well with all budgets.

The Duke in the game of Iron Duke Slots is the Duke of Wellington. In addition to this symbol there is also a Canon, Cannon Balls, a Soldier, Guns, Flag and cards that range from the age through nine. The Iron Duke is also the wild symbol and can substitute for all the other symbols in order to help the play achieve winning combinations. The Cannon is the scatter symbol in the game.

The Waterloo Feature is one of the best components available for players in iron Duke Slots. When you get three or more Cannons you activate the Waterloo Feature. This takes players to another screen where players find themselves on a battlefield with three cannons. From this point you want to look for Napoleon at the top of the screen where he remains and watches the commencement of the battle. The mission for the players at this stage of the game is to click on the “fire” button in order to set off the cannons. In order to win the battle there can be no more than one cannon remaining. This one cannon will reveal how many free spins the player will receive—a maximum of 25 free spins is possible and up to 4 multipliers. The feature includes a retrigger feature that allows a player to play again and obtain up to a maximum of ten free spins in order to win even more money. In addition to free spins players can also win random spins at the end of any spin during one of the three progressive jackpots which are the mini, minor and major jackpots. The game also includes an auto player feature that allows players to pre-set the number of spins they want the game to run consecutively. They can stop this feature manually, but it will stop automatically when a player activates the Waterloo feature. Players are also able to choose the speed at which they want the reels to spin.
Play Now

Where to Play Iron Duke Slots